Museum of the Castle of San Giusto – Armoury
Lapidarium of Tergeste 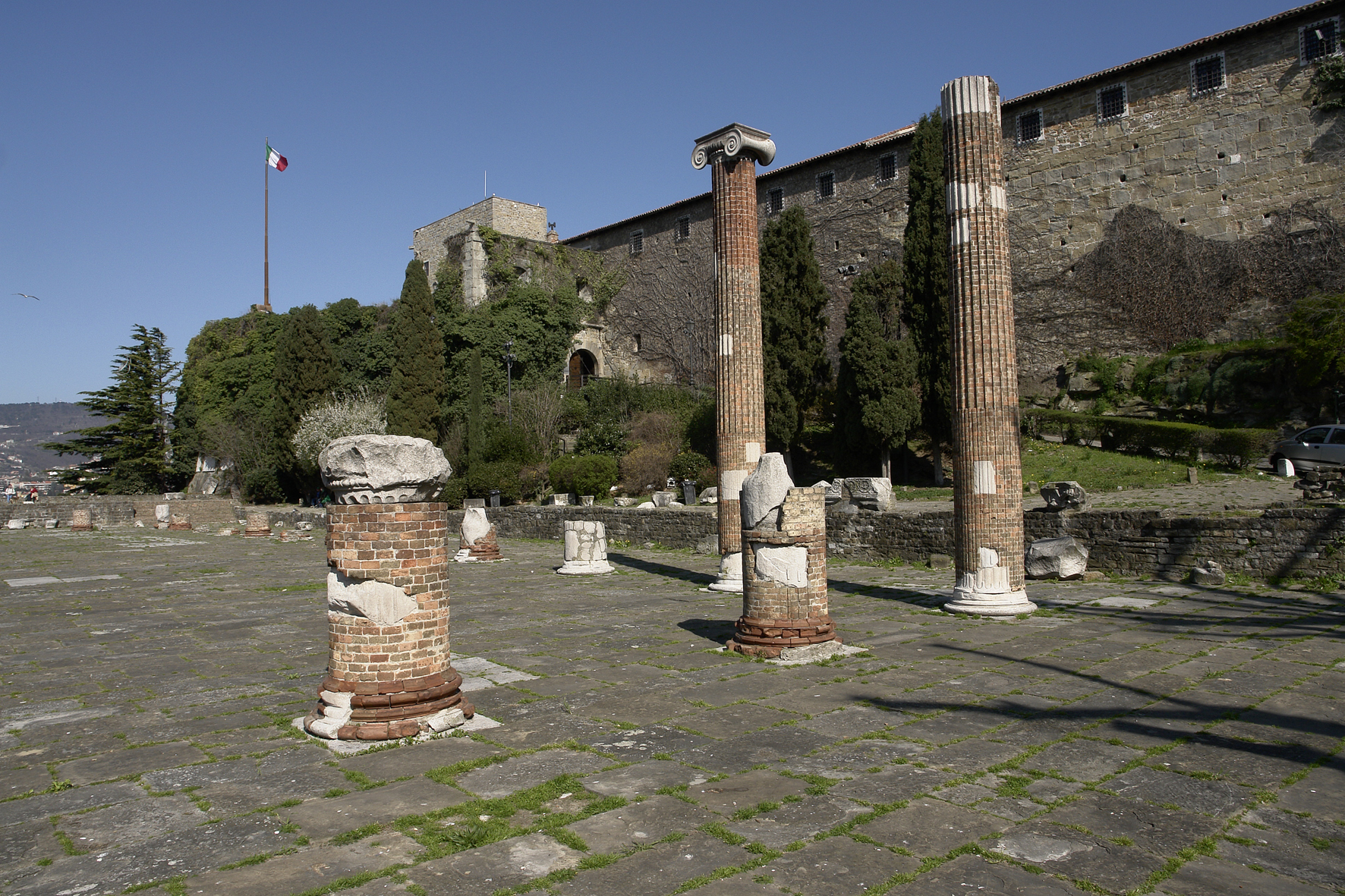 The Castle of San Giusto stands on the hill overlooking the city of Trieste, its gulf and its hinterland. In 1382 the town came under the control of the Austrian Empire, following which the Imperial court ordered the construction of a fortress to protect the town and provide accommodation for its Captain.The building work lasted from 1468 to 1636. It began with the Captain’s House – a fortified residence flanked by an L-shaped tower – which was subsequently incorporated into a triangular fortress with a bastion at each corner. Each bastion was built to a different design, dictated by the defensive techniques in use at the time of construction: the Round or Venetian Bastion, built in 1508-1509; the polygonal Lalio or Hoyos Bastion, built in 1553-1557; the triangular Fiorito or Pomis Bastion, completed 1636.

The Austrian Imperial Captains resided in the castle until 1750, when it was converted for use as a garrison and a prison. It was thoroughly renovated and converted into a museum in 1936, since when it has stood as a symbol of the city, firstly because the sentry walkways on the parapets provide a splendid panorama, and secondly because it houses two important sections of the Museums of History and Art: the Museum of the Castle of San Giusto – Armoury and the Lapidarium of Tergeste in the Lalio Bastion. 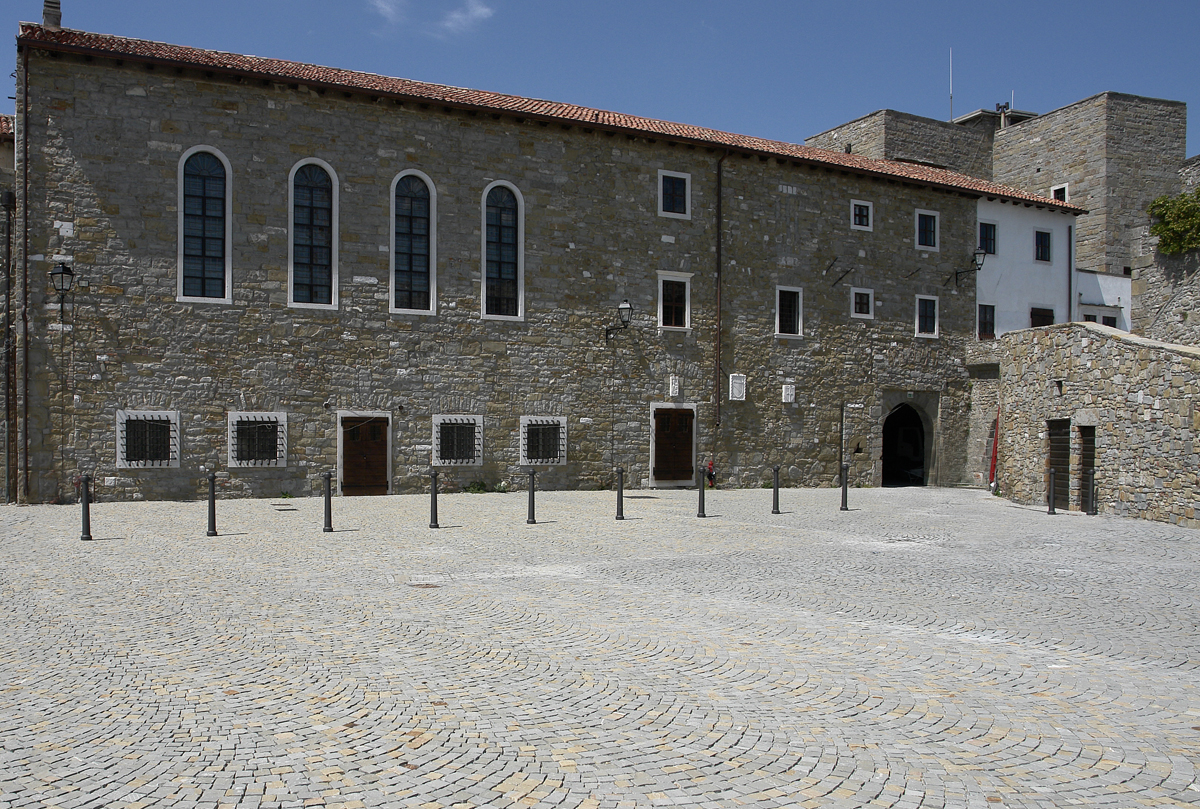 Inside the drawbridge, a large vestibule, built in 1557, houses numerous local stone plaques from the 16th to the 19th centuries and two large 19th century bell- striking statues known as Michez and Jachez, taken from the Town Hall clock in Piazza dell’Unità d’Italia. One of the city’s symbols, known as the Melon – made of stone probably in Roman times – is conserved in the Atrium on the ground floor of the Captain’s House, beside the exit from the Museum of the Castle of San Giusto – Armoury. The extensive Soldiers’ Courtyard is enclosed by the fortress walls, on top of which run the open-air sentry walkways; the Courtyard provides access to the Lapidarium of Tergeste, the Cannon Room and the Bottega del Vino. 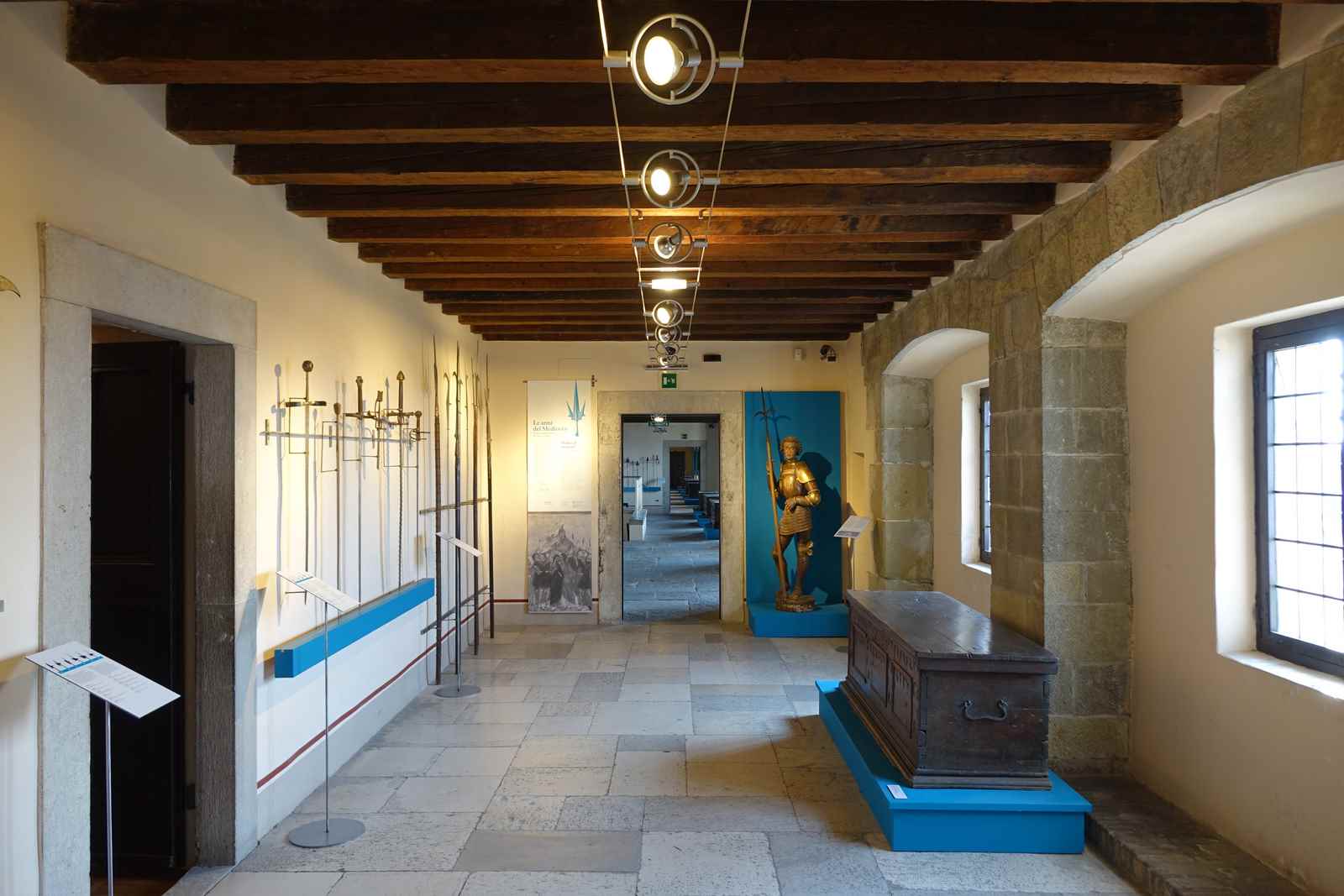 THE MUSEUM OF THE CASTLE OF SAN GIUSTO – ARMOURY

The Museum of the Castle of San Giusto Armoury is housed in the 15th and 16th century quarters of the Captain’s House. Visitors enter the Museum via the Round Bastion, straight in the historic core of the Castle, that is the late 15th century Captain’s House.The exhibition path begins with an introductory room, where the story and the urban development of Trieste are narrated thanks to old views, historic photographs and a scale model of the early 20th century, which reconstructs the appearance of the city before it expanded in the 18 and 19th centuries. Visitors can then enjoy the 15th century rooms and the covered sentry walkways, where the Armoury is. Pole-arms (halberds, partisans, corseques, glaives), long and short bladed weapons (swords, daggers, bayonets), archery weapons (crossbows), long and short firearms (springalds, muskets, pistols) and accessories (powder horns and cartridge holders) are arranged in a display chronicling the development of European weaponry from the Middle Ages to the 19th century.The exhibition is completed by numerous examples of chests dating to the same periods as the weapons. After descending to the first floor, visitors can see the richly-appointed Caprin Room and Anteroom, created to house the furnishings once belonging to Giuseppe Caprin (Trieste 1843-1904).

A renowned journalist, historian, publisher and Italian patriot, Caprin had made his home – a Renaissance-style house built in 1878 in the San Giacomo district – a salon of Italian culture. The furniture – among which are exquisite wedding chests and a rare carved and gilded wooden lantern of the 16th century from aVenetian galley – the sculptures and the paintings are all in the Venetian tradition and date from the 16th to the 18th century. On the ceiling hangs the collection’s most important work, a large canvas depicting Il Trionfo di Venezia, from the workshop of Andrea Celesti, dated at the end of the 17th century. These rooms were created uniting the two original storeys of the Captain’s House and represent, together with the adjoining helicoidal staircase, the heaviest intervention during the works of the Thirties of the 20th century, which aimed at transforming the Castle into a Museum. On the ground floor visitors can enter the late Gothic chapel of San Giorgio, whose apse is distinguished by a cross vault with ribs supported on brackets sculpted as heads, and at the centre of the vault by the coat of arms of Frederick the Third of Habsburg, who ordered the construction of the fort in 1468. 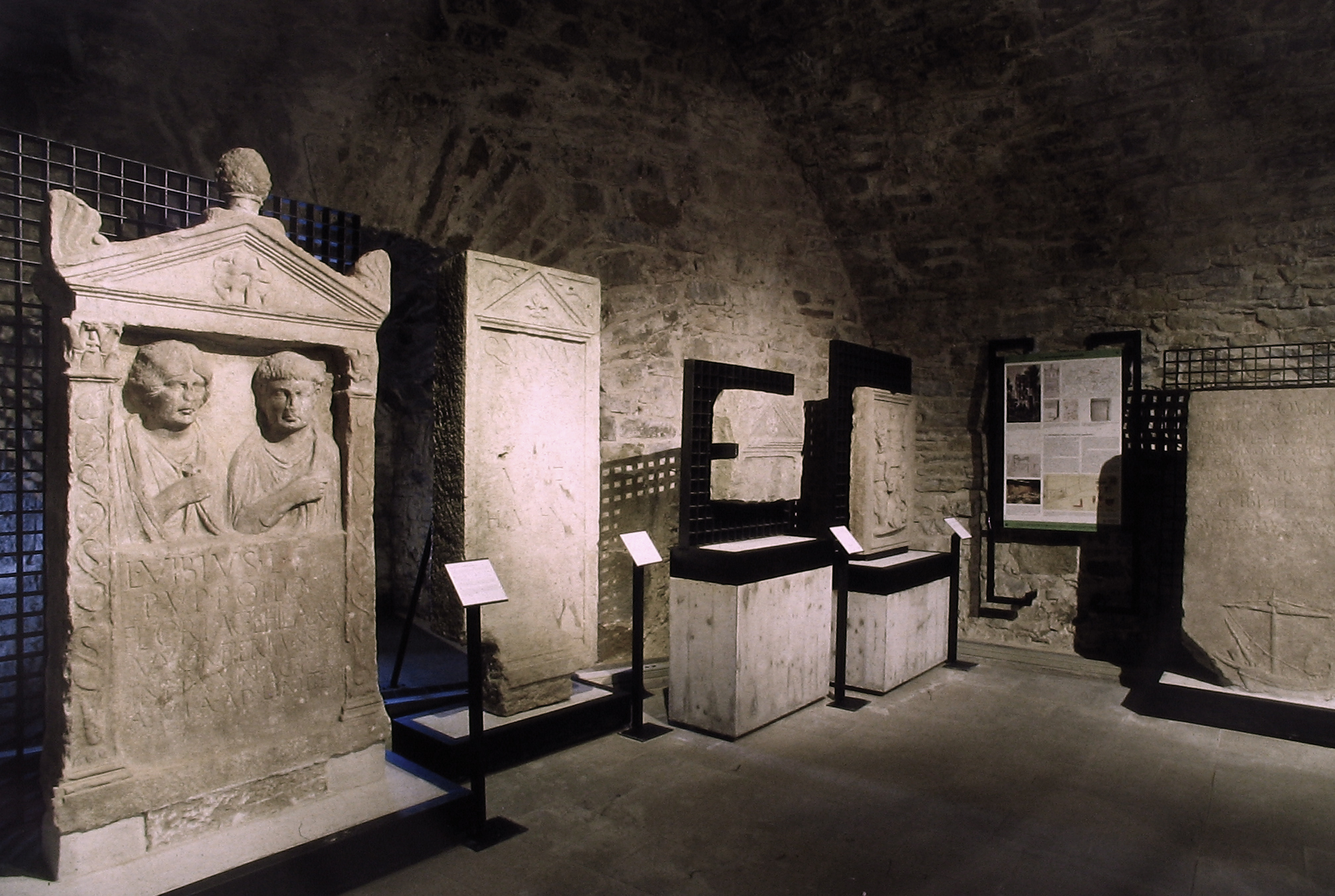 From the Soldiers’ Courtyard visitors can access the Lapidarium of Tergeste, located within the Lalio Bastion. The Lapidarium is dedicated to the history of Trieste in Roman times, and displays precious monuments from the top of the Capitoline hill (the present-day area of San Giusto, where there were the civic basilica, the forum and the propilaeum), worship places (inscriptions dedicated to Jupiter, Cybele, Silvanus, the Bona Dea, Hercules and Minerva), the city walls, the Theatre (statues from the scene) and from cemeteries: altars, stelae, pillars, urns and sarcophagi mentioning the names of ancient inhabitants of Trieste. A room is dedicated to the mosaic floors of the luxurious maritime villa that was found on the coastline, in Barcola (not visible anymore).The mosaics date between the end of the 1st century BC and the mid-1st century AD and testify to the fine taste of the owners of the villa, who tried to imitate the residences of the Emperors Augustus, Tiberius and Nero.